After enjoying the tranquil atmosphere surrounded by bamboos at Jizō-in, I headed to bustling Arashiyama to catch autumn colors at Hogon-in (宝厳院), a sub-temple of Rinzai Zen temple Tenryu-ji.

Hogon-in was originally built in 1461 with the support of Hosokawa Yoriyuki, the Kyoto Kanrei (Shogun’s Deputy in Kyoto) during the Ashikaga shogunate / Muromachi period. The temple’s first abbot was Seichu Eiko, a 3rd generation descendant of Musō Soseki, the founder of Tenryu-ji. 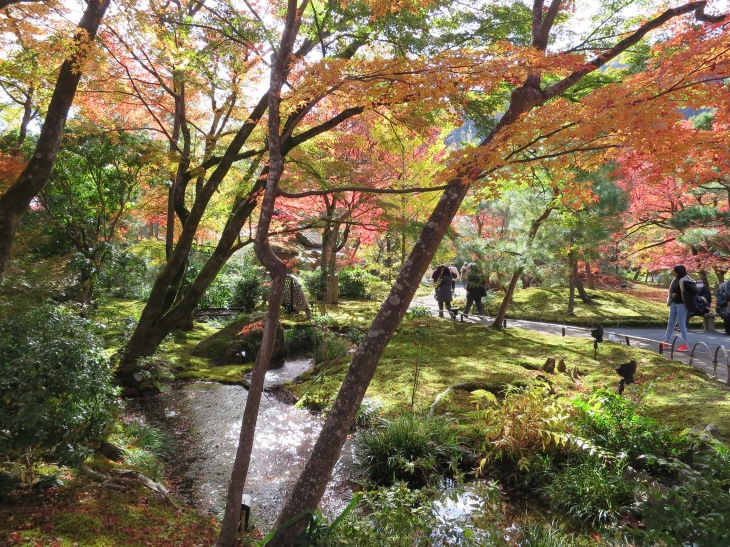 The temple was originally located in Northern Kyoto, but was lost in the fires of Onin War (the civil war during the Muromachi period which evoked the Sengoku period, the warring states period). Hogon-in was reconstructed during the Tensho era, receiving support from Toyotomi Hideyoshi (Japan’s 2nd great unifier who ended the Sengoku period). During the Meiji period, the temple was moved to the site of former Kongenji temple, also a sub-temple of Tenryuji. Finally, the temple was moved to its present location in 2002 (that’s fairly recent!), and the main temple has undergone reconstruction in 2008.

The principal image worshiped here is the eleven-faced Kannon, and the Jizo Boddhisatva, which is said to be worshiped by Ashikaga Takauji (founder of the Ashikaga shogunate). Noriko Tamura’s Fuga Sansa Sansan Jizai, paintings illustrating 33 incarnations of Kannon (Goddess of Mercy), spreading out across 58 panels on sliding doors in the main hall can also be viewed here. 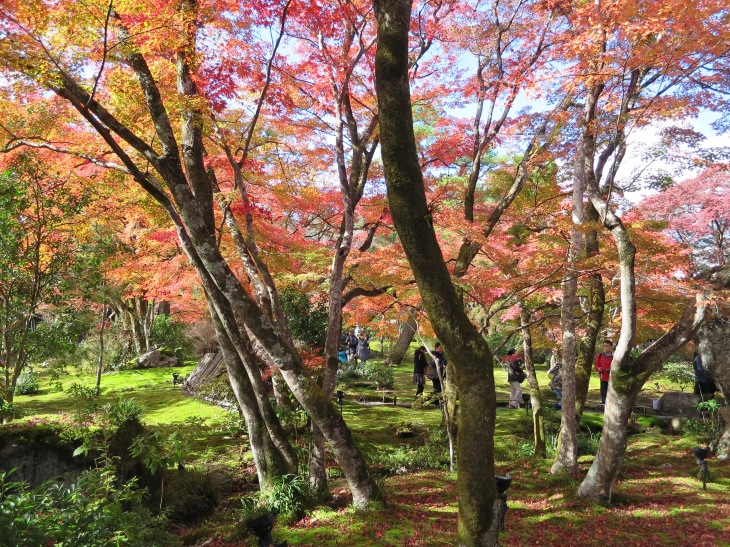 Hogon-in is famous for its garden – Shishiku no Niwa, the Lion’s Roar Garden which was designed by Sakugen Shūryō during the 16th century, after his second journey to Ming China. The garden features thick moss, large, distinct-shaped rocks, and borrowed scenery of nearby Arashiyama mountain.

Near the entrance of the garden is a dry pond representing the sea of suffering of human life, while three large stones represents the Buddha and his two main disciples. Another interesting set of dry stones here depicts the Dragon Gate of the Yellow River in China. According to Chinese mythology, a carp that could leap the falls of the river at the Dragon Gate will transform into a dragon, which symbolizes enlightenment.

The garden is a circuit-style garden, so autumn being autumn and Kyoto being Kyoto means human congestion. I was surprised by the crowd here as there were not many sites / posts about this temple online. I guess being located in the vicinity of the Togetsukyo bridge effortlessly brings in the crowd.

Other important building here is the Hall of Boundless Light, enshrining ashes of deceased worshipers.

Near the main gate you would also find the Arashiyama rakans (arhat).

Opening hours: 09:00 – 17:00 during Spring and Autumn, check out the official site for specific dates.