Hokokuji (報国寺) is a Rinzai sect. of Zen Buddhism temple, belonging to the Kenchoji School, built in 1334 by Tengan Eko / Butsujo Zenji in commemoration of Ashikaga Ietoki, grandfather of Ashikaga Takauji, the founder of the Ashikaga Shogunate. It was both the family temple of the Ashikaga clan and later the Uesugi clan.

Upon entering the temple, there is a small kare-sansui (dry landscape) garden.

The main hall, which was rebuilt after the Great Kanto Earthquake, enshrines the Shaka-nyorai-zazo (seated Shakyamuni), sculpted by famous Buddhist sculptor, Takuma Hogen. A statue of Bustujo Zenji, sculpted in 1347 is also enshrined at the annex (kasho-do).

The bell tower retains the original thatched roof and the bright gingko trees made it a even better. There is also a gorinto near the bell tower in memory of warriors lost in the Siege of Kamakura in 1333, which marked the end of Hojo’s clan ruling in Kamakura.

Now lets enter the moso bamboo groves with over 2000 bamboo stalks. The temple is free to enter, but admission to the bamboo groves costs 200 yen. At this point, you can opt to have matcha later at a small tea house, Kyukoan, in the bamboo groves at a combined fee of 500 yen.

I really recommend going for the green tea option – it is not everyday that you get to admire bamboo groves while having green tea and some dry Japanese sweets. The piece of paper for placing the sweets can also be taken back as a souvenir. 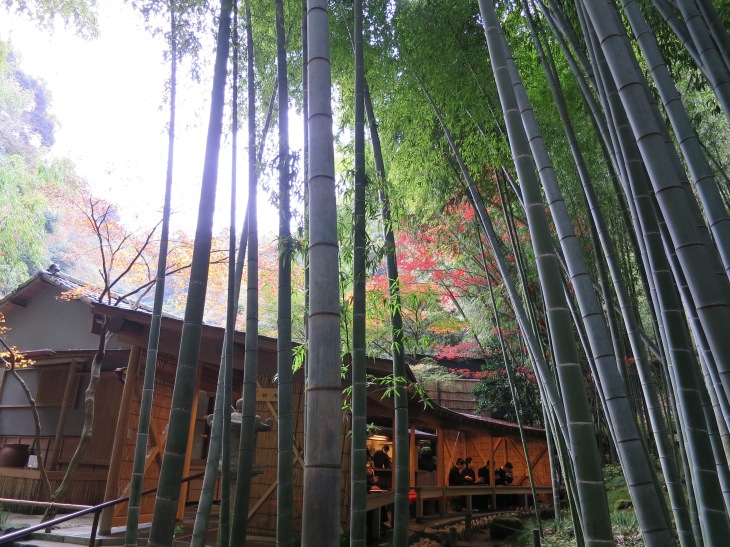 There are also large caves here, said to be the burial grounds of ashes of the Ashikaga family, including those of Ietoki and Yoshihisa (not to be confused with the 9th Shogun of the Ashikaga shogunate), both of whom died of seppuku. Yoshihisa is the son of Ashikaga Mochiuji, Kamakura’s fourth Kanto-kubo who rebelled against the ruling Ashikaga shogunate – the Eikyo rebellion. However, Mochiuji lost and committed seppuku at a temple near Zuisen-ji, while his son Yoshihisa who was 13 at that time took his life at Hokokuji.

There is another garden behind the bamboo grove as well, benches available to awe at the tranquility surrounding it.

There were even some autumn colors to see here too, though I have to say the maple trees here were mostly starting to turn colors and some were even still green at the time of my visit.

After spending an hour here, I headed back to Kamakura station for an early lunch at this restaurant one floor above the station. The tempura bowl was super delicious.