The Daisetsuzan Mountain Range is called Kamuimintara in Ainu people’s (indigenous people of Hokkaido) language, which means garden where the Gods play, or playground of the Gods. In my trip to Hokkaido this early autumn, I was able to hike 3 mountains which are part of the Daisetsuzan volcanic group – Asahidake, Kurodake and Akadake. Lets start with the first mountain – Asahidake.

Asahidake (旭岳) is the tallest mountain in Hokkaido with a height of 2,290m.  The mountain is an active stratovolcano with the last eruption determined to be in 1739. The snow on Asahidake typically melts around June / July which also marks the start of the hiking season. The mountain’s fall foliage is especially beautiful with a mix of green, red, yellow and orange. Asahidake is the first place to see autumn and snow due to its altitude with leaves starting to change color in early September. In winter, the mountain is visited for skiing and snowboarding.

I was excited to see the first autumn of the year but was hesitant on hiking the mountain on this day as it was supposed to rain throughout the day. I still decided to head to the mountain, since the precipitation forecast lowered when I last checked earlier that morning. While waiting in line for the bus, it started drizzling! Great.

I arrived at the ropeway station before 09.00 a.m. and was happy that the rain has stopped. The ropeway ride is only 10 minutes and takes you to Sugatami Station which is at 1,600m. Note that if you are against taking the ropeway, you can hike from Asahidake Onsen or the base of the ropeway station.

From Sugatami Station, there are various hiking trails you can take. First is the short trail course that will only take 30 minutes. Second is Sugatami Trekking Course which covers observation points 1-5, Suribachi Pond, Kagami Pond, Sugatami Pond and the fumaroles. This course takes approximately 1 hour to complete. Third is heading towards Susoidaira (1.5 hours) or Naradake Onsen (2 hours), which starts after observation no. 3 or 4. Lastly is to hike Asahidake which takes 2.5 hours from Sugatami Pond.

My hiking plan was to take the counter-clockwise trail towards Sugatami Pond, then continue to hike Asahidake. After coming down from the mountain, I was to continue the counter-clockwise trail to complete the Sugatami Trekking Course. After reaching Sugatami Station, I headed straight for the Sugatami Pond which took about 30 minutes since I stopped a lot for photos. There was quite a crowd at the Sugatami Observation Point including groups of children. I continued to the fifth observation point before starting the climb towards the summit.

The entire trail consisted of dirt and rocky trails. Certain sections of the hike had loose gravels which I was not fond of as it was easy to slip walking on those. I wished I had brought along my hiking poles, they would have come in handy. The ropes at certain sections of the trails also barely serves purpose as they were either hanging too low or was not stable enough. In other words, it was easy to trip and fall if you lose your bearing.

The surrounding area was foggy and visibility worsened as I went higher. The fumaroles were a pretty sight, reminding me that it was an active volcano after all. Occasionally,  when the fog clears (though for less than few minutes), I was able to witness the already changing colours of the mountain. I could already see some red, orange and yellow around the mountain. There were all types of hikers, even a mother carrying a child on a baby carrier, though they did not hike all the way to the top. 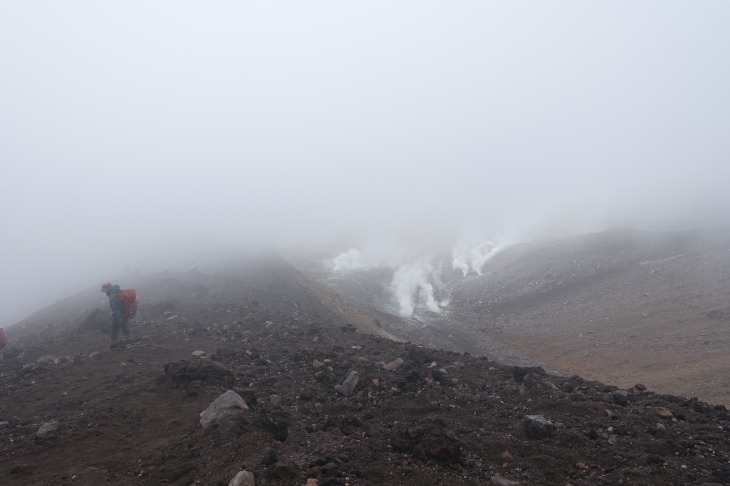 I took a lot of breaks in between, eating Soyjoy, a newfound love of mine. I reached the summit in 2.5 hours but there was nothing to see around as it was covered in fog. From the summit, it is possible to continue to Kurodake (at least another 4 hours). I did meet one hiker on the way down who came from Kurodake. 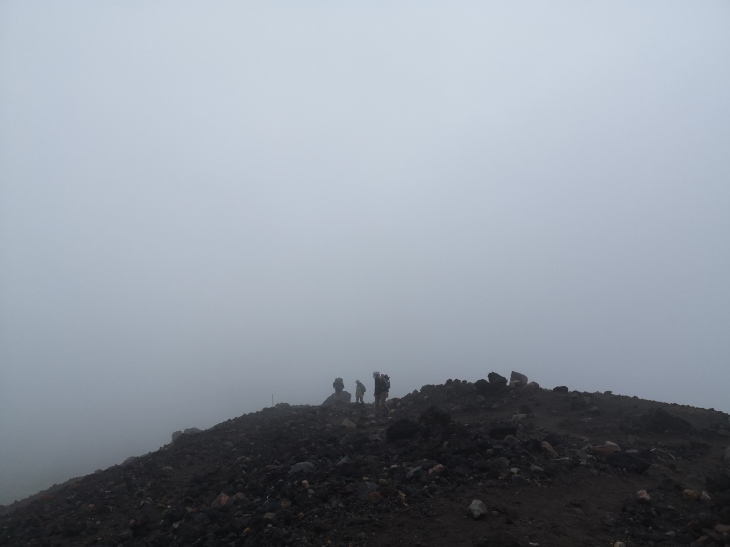 I was planning to have some snacks before heading back down when it started to drizzle – seriously? I headed back down without taking a break, which was a longer trip than I intended. The rain did stop pretty quickly though – you really can’t tell the weather on mountains. Going down was not easy, especially without those hiking poles. Along the return hike I played a speed battle with the fog, between it reappearing and me taking out my camera. 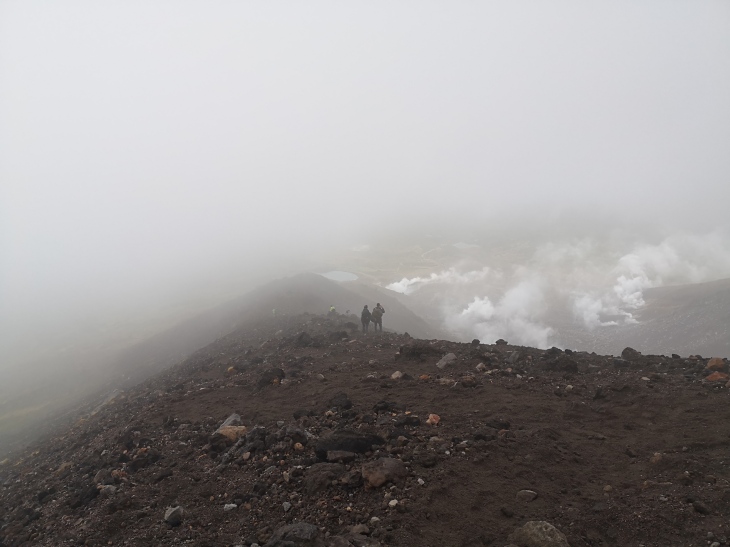 I arrived back at Sugatami Pond after 2 hours or so and wanted to have my snack there when it started drizzling again. So I decided to just finish the remaining Sugatami Trekking Course so that I could maybe have lunch at the ropeway station. The autumn colors around the trekking course were easier to capture compared to when I was heading up / down the mountain. I even saw a Siberian chipmunk while walking on the trail. 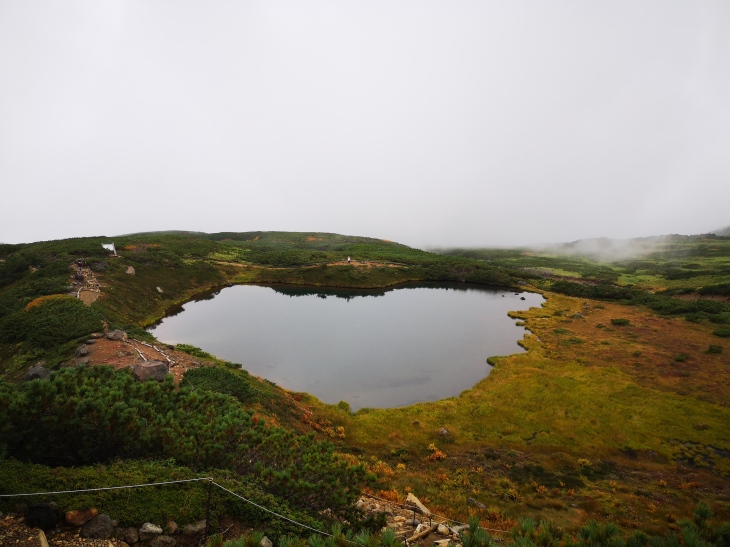 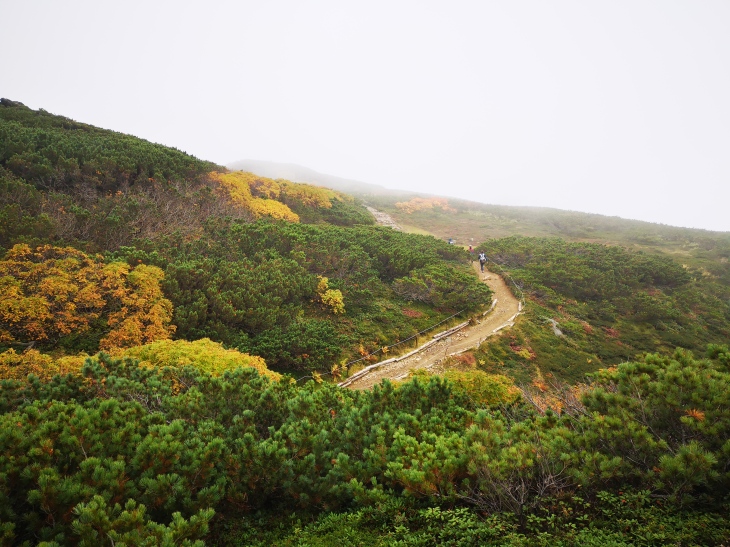 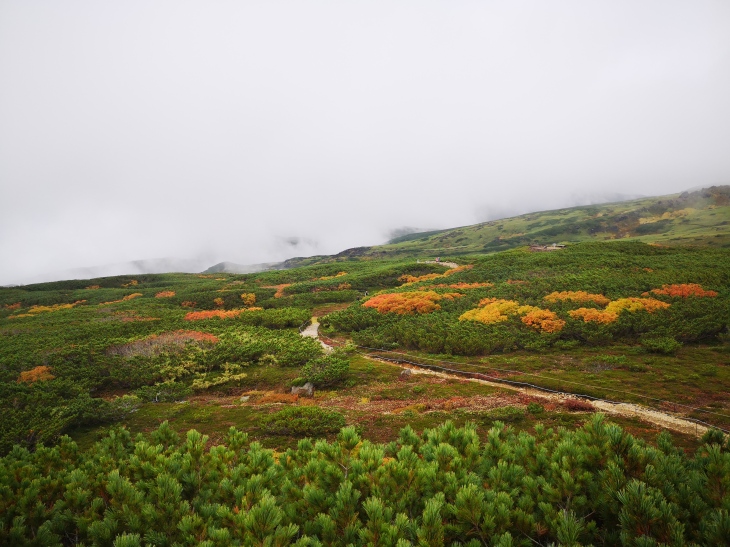 I was back at Sugatami Station 10 minutes before the next ropeway departure and was back at the base ropeway station at 3.10 p.m. The next bus back to Asahikawa Station was at 3.30 p.m. so there was no time for lunch.

Well, I was glad I continued with my plan for this hike even though it rained occasionally. At least it wasn’t heavy and I was able to complete the hike and take some good pictures.

If you are coming to this area, be sure to try hiking up to the summit. It is surprisingly possible even for a person who does not do any form of exercise throughout the year (except when I am in Japan). Wear a good pair of hiking shoes and socks though – those rocks can kill your feet.

Getting to the base of the ropeway station:

Getting to Asahikawa Station: