The irregularly opened Souken-in (総見院) was built in 1583 by Toyotomi Hideyoshi as Oda Nobunaga’s final resting place (Oda was not buried here, his body was not found). Oda Nobunaga is considered the first great unifier of feudal Japan, and Toyotomi, his retainer, the second. The temple thus is much like a mortuary, and though there was no clear sign that photos were prohibited, I held myself back in respect of those buried here. Therefore, apologies for the irrelevant photos.

In the main hall, there is a seated wooden statue of Oda Nobunaga, coated with lacquer – no pictures for this one. You can enjoy a cup of tea and snacks here in the main hall while admiring the beautiful statue. 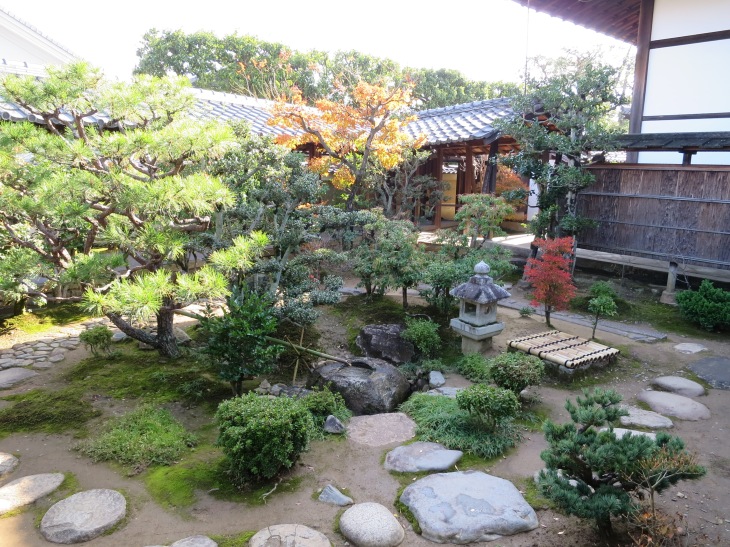 If you look around the temple, you will see a number of tea rooms, most probably thanks to the first abbot Kokei Sochin who is known for his mastery of tea ceremony.

The oldest camellia tree in Japan @ 400 years old can also be found here at this temple, said to be favored by Toyotomi.

Another temple that had its special opening on the day of my visit was Ōbai-in (黄梅院), which I highly recommend for its fiery autumn leaves, though I cannot reflect this in most of my photos due to the photography restriction here. It is though possible to take pictures at the mossy front of the temple.

Ōbai-in was founded in 1562 following Oda Nobunaga’s order to Toyotomi Hideyoshi to built a mortuary for him to hold a memorial service for his father, Oda Nobuhide.

The bell tower / Shoro here is donated by Kato Kiyomasa in 1592, and is said to be from Korea (Kato is known for his involvement in the Imjin War against the Jaseon dynasty).

The dry landscape garden Jikichu-tei designed by master of tea ceremony Sen no Rikyu can be enjoyed here from different angles. The garden is rare for a dry landscape garden as it is covered in moss. In the main hall, the fusuma’s (sliding doors) painting, Chikurin Shichikenzu (seven men of wisdom in bamboo forest) are painted in India ink by Unkoku Togan, whose style of painting was inspired by Sesshu Toyo, a master of ink and wash painting. 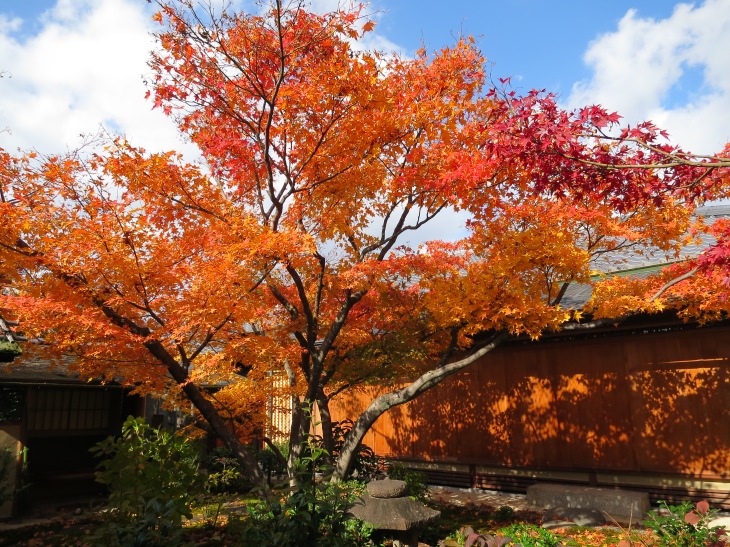 Aside from Oda Nobuhide, the graveyard in the temple is also the burial grounds of Mori Motonari, a daimyo of the Chugoku region during the Sengoku period and other members of the Mori clan.

The more photo-friendly Ryogen-in (龍源院) is open to the public, and boost 5 different kare-sansui gardens. Founded in 1502 by the then lord of Noto Province Hatakeyama Yoshimoto, the sub-temple is said to be the oldest Zen-temple style building in Daitokuji.

One of Ryogen-in’s rock garden, Totekiko was designed by Nabeshima Gakusho in 1958 and is said to be the smallest in Japan.

Here is Ryugintei Garden said to be the oldest garden in Daitokuji, designed by Soami, the Japanese landscape artist during the Muromachi period. The garden features a rock in the centre symbolizing Mount Sumeru, the sacred mountain in Buddhist cosmology.

Another garden here is the Isshidan Garden, with the white sand symbolizing the sea, the Kamejima (turtle island) representing longevity, and the tall rock behind representing Mount Horai (or Mount Penglai), the legendary immortal island.

That wraps up my visit to Daitokuji and 6 of its sub-temples, which took me 3 hours to complete. Overall, it was a very relaxing experience and I certainly am looking at revisiting this temple in the later future especially since I missed Kotoin due to the renovations.

Daitoku-ji’s grounds is accessible for free, but the sub-temples require admission fees to enter. As mentioned above, only 4 are regularly open to the public, while some are irregularly opened – usually during spring / autumn, and more are only accessible for private occasions.

There are various ways to access Daitokuji depending on where you are coming from.