Since I intended to head to Ginsendai (銀泉台) via the 6 a.m. bus, I stayed in Sounkyo Onsen after my Kurodake hike the day before. It was not difficult to wake up early (4.30 a.m.!) since most of those who were in my room woke up as early. I was anxious about this Ginsendai / Akadake (赤岳) hike the most, since my hiking plan is expected to be longer than the hikes I did at Asahidake and Kurodake.

I took the 6 a.m. bus to the Taisetsu Lakesite Parking Lot from the Sounkyo Youth Hostel which was the lodging I stayed at, so there was not much rush. It took less than 30 minutes to the Lakesite Parking Lot, and there more passengers (who drove by car) got onto the bus as we headed to the trailhead (for another 30 minutes). Even though it was a weekday, the bus was fully crowded at this point.

We arrived at the trailhead (1,517m) a little after 7 a.m. There is a restroom and forest patrol office here, where you are required to submit your hiking plan. After stretching out a little, I started my hike towards the First Flower Field (第一花園). We came upon the famous autumn slope covered in nanakamado bushes 30 minutes into the hike. Securing a spot to take pictures here was not the easiest, but I was happy with the outcome.

Most of the other hikers I started with had already proceeded further when I finally left the famous picture spot so I could now hike in a more relaxed pace. I reached the First Flower Field 30 minutes later. The roads and lakesite parking lot are visible from here, where I took a short break.

At this point, I was already feeling tired and was contemplating whether to return, more so after seeing the ascending trail ahead. My spirits were lifted after spotting a cute chipmunk so I continued further to Komakusa-daira (駒草平). It was getting chilly at this point, I seriously wonder why did I not bring a glove along.

The views around Komakusa-daira was spectacular, and I was tempted to see more of this beauty, ignoring the difficulties that lies ahead, now a rocky ascending trail. Since I am now into the last leg of getting to Akadake (2km and 1 hour away), I would not want to give up. The last part of the ascend took longer than I expected and I was relieved to hear “only a little more to go” by a descending hiker. 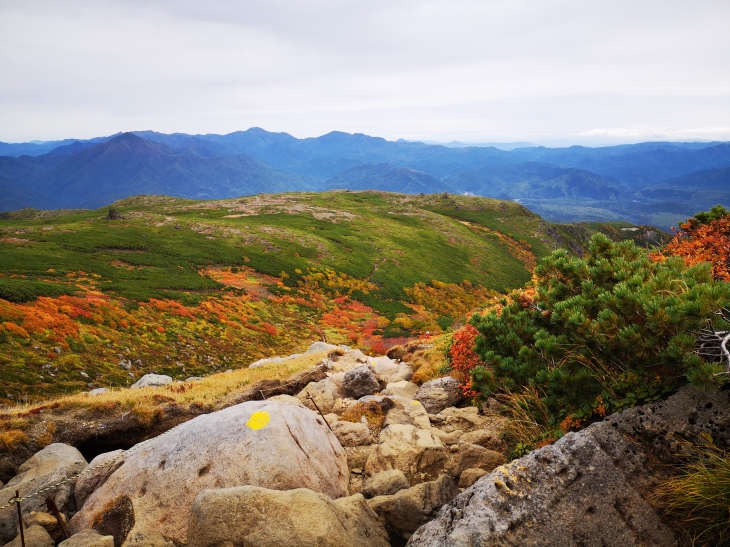 “Ah the summit” – nothing beats arriving at the summit, though it was freezing. At 2,078m, you can see the Daisetsuzan mountain range, which had a mix of colors at the time of my hike. After taking the obligatory summit picture, I was happy to find another chipmunk here. It is possible to hike further to Koizumi-dake (2,158m) (another 30 minutes) but I opted out. I did not stay long on the summit knowing how much time I needed to descend in order to catch the bus back to Sounkyo (and later to Asahikawa). 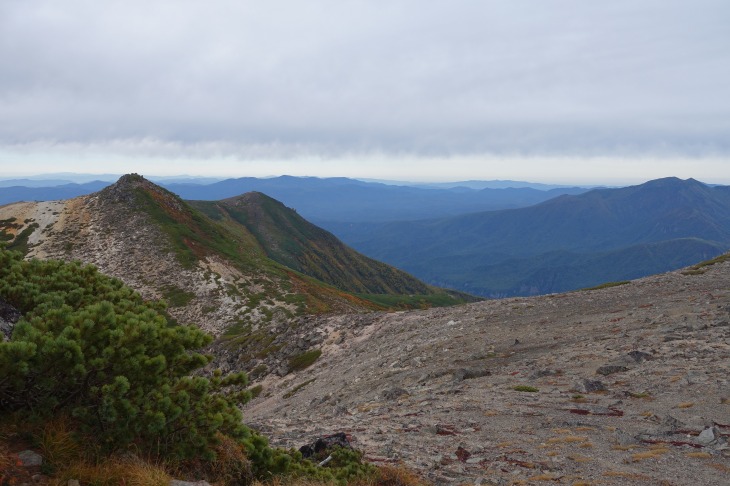 The descend was a torture, mostly because of that rocky trail – it was really hurting my feet, they were trembling by the end of it. Nonetheless, I managed to reach the trailhead to catch the 3 p.m. bus which brought me back to Sounkyo at 4 p.m.

The road to Ginsendai closes to regular traffic during the autumn season, starting somewhere in mid-September for two weeks, so you need to take the bus (500 yen one way) from the Taisetsu Lakesite Parking Lot. In summer, between late June and mid-September, it is possible to drive-up to the trailhead. Ginsendai is inaccessible outside the aforementioned months.

During summer, two buses runs a day from the Youth Hostel or the Sounkyo Bus Terminal at 6 a.m. and 2.15 p.m. with returns at 7.30 a.m. and 3.30 p.m. (check out this timetable which will be updated). During the busy autumn season from mid to end of September when the road is closed to regular traffic, 5 buses runs from Sounkyo Onsen to the Lakesite Parking Lot a day (450 yen one way), and even more buses run from the lakesite to Ginsendai (every 30 minutes from 6 – 9 a.m. and less frequent after that). Check out the Kamikawa Town website for the timetable (look for shuttle bus timetable).

If you are taking the bus to the Lakesite Parking Lot from the Sounkyo Youth Hostel, the bus staff will collect the bus fare from you (in the bus) when you arrive at the Sounkyo Bus Terminal (before the passengers boarding at the bus terminal gets on the bus).