The Kamo-jinja – Kamigamo-jinja and Shimogamo-jinja are located in northeast of Kyoto, though both are roughly 4km away from each other. The northeast corner is believed to be unlucky, and as both shrines are located along Kamogawa (Kamo River) which runs from this direction, they are meant to prevent evil from entering the city.

Admission to both shrines is free and they are open as early as 5.30 a.m. (an hour later in winter).

There are many ways to get to Kamigamo-jinja, and depending on where you are coming from, it is best that you rely on Uncle Google Maps for the best option. But here are some nearest station or bus stop you could get to:

The Aoi Matsuri, one of the 3 major festivals in Kyoto, parades from the Imperial Palace, heading to Shimogamo-jinja before finishing at Kamigamo-jinja. The formal name of the festival is actually Kamo Matsuri due to its relation with the Kamo-jinja.

First, you will see the large torii gate. Remember, when passing the torii gate, walk on the sides as the kami (gods) are meant to walk in the middle. Slightly bow before entering.

Walking past the first torii gate, the park-like grounds are filled with sakura trees which are just starting to bloom (not in full bloom yet). The path to the inner shrine is called sando, and is meant for worshipers to clear their mind in preparation of entering the shrine. I have to say, walking past these was certainly calming.

This sakura tree in the picture below is blooming faster than the rest though. 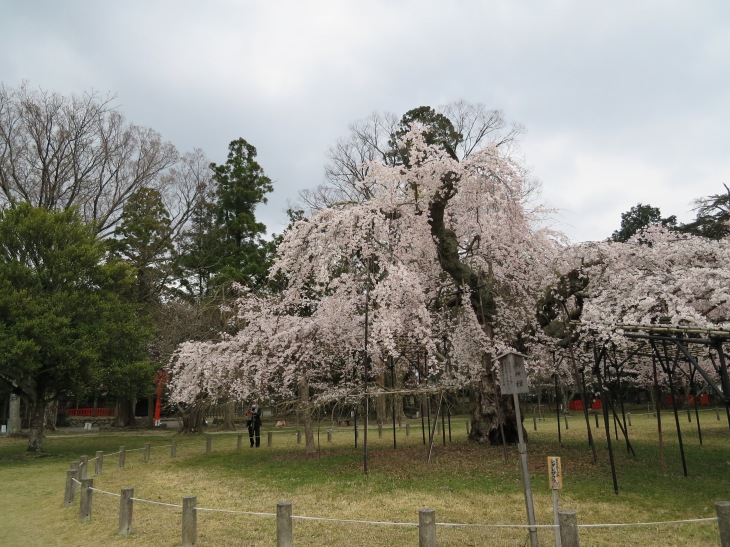 Upon passing Ni-no-torii, you will see music hall (Gaku-no-ya), which is meant to be used for musical ceremonies.

Next is the Haiden. In front of Haiden, there are two large sand cones – Tatezuna, which are believed to have purification powers.

It started drizzling as I exited the shrine, towards the other Kamo-jinja.