I had arrived in Shizuoka after visiting Hamamatsu and Kakegawa on Day 2 of my Autumn 2016 trip. I cannot confirm whether this pass is still on sale now, but I had bought the Shimizu Port Maguro Trip Pass (Tokumori) from Japanican which costs 3,180 yen.  It was definitely a bargain, considering my itinerary which includes Kunozan Toshogu, Sunpu Castle, Miho no Matsubara, and S-Pulse Dream Plaza.

I chose to collect the pass from Shin-Shizuoka station, as that was the closest station to my hotel. I showed the confirmation printout (lesson learned: print in Japanese) to the counter attendant and explained to her (in Japanese) that I wanted to collect the Tokumori pass. While she knows what the pass is, she said that the pass cannot be collected here, but the Shin-Shimizu station. I was confused as the confirmation indicated clearly that the pass CAN be collected from Shin-Shizuoka station.

Though Shin-Shimizu station was not far from Shin-Shizuoka station (20 mins), I did not want to waste time. It was already a long day as I had traveled from Kyoto in the morning to Hamamatsu, then to Kakegawa.

Disappointed, I left the counter and decided to call Japanican instead to clarify. Thankfully, the operator asked that I hand the phone to the counter attendant to explain. It took time for the operator to explain to her, and after more than 5 minutes (there goes my phone bill), she understood and was ready to prepare the pass for me. It appears that she was confused, as handing the pass to an individual customer never happened – it was always handled by a travel agent. The counter attendant repeatedly apologized to me (for taking up my time) and was thankful that I spoke a little bit of Japanese. There was no way I could be angry at someone that apologetic. Furthermore, this would not have happened if the attendants were briefed about being a “collection point”.

I got my hands on the pass, and headed to the hotel to rest in preparation for what would be the longest day of my trip.

The first destination was Kunozan Toshogu (久能山東照宮), which can be accessed by climbing 1000 stone steps to the shrine, or by taking the bus to Nihondaira then taking the ropeway to the shrine. I took the easier way, by taking the Justline bus from Shizuoka station to Nihondaira. The bus trip costs 580 yen (bus stop no. 11, bus no. 42) and is covered by the Tokumori pass. The ride was scary as it was going uphill and went through winding roads. The Nihondaira ropeway starts operating from 9.10 a.m. and the bus trip takes 40-50 minutes.

The ropeway trip to Kunozan Toshogu only took 5 minutes. It costs 600 yen one-way, but was further discounted when I showed my Tokumori pass to them.

Entrance fee to the shrine is 500 yen, or 800 yen if you would like to visit the museum as well.

Kunozan Toshogu is a Shinto shrine dedicated to Tokugawa Ieyasu, founder of the Tokugawa shogunate and famously known as one of the three unifiers of Japan.

He was buried at Kunozan Toshogu (thus making this shrine the first Toshogu shrine), though his remains were thereafter buried at the other more famous Nikko Toshogu. There are many Toshogu shrines in Japan, all of which are dedicated to Tokugawa Ieyasu.

Tokugawa Hidetada, the third son of Tokugawa Ieyasu ordered for the shrine to be built on Mount Kuno (Kunozan in Japanese) fulfilling Ieyasu’s will. He wanted to be buried here in Mt Kuno of Suruga, near to Sunpu Castle which he had spent his retirement days in. In his will also, he asked that the funeral should be held in Zojoji in Edo, a monument to be erected in Daiju-ji in Mikawa (today’s Okazaki), and a small shrine to be built on Mt. Nikko a year after his death.

Enshrined is Tosho-Daigongen, the deified spirit of Tokugawa Ieyasu. The secondary kami enshrined here are the spirits of Toyotomi Hideyoshi and Oda Nobunaga, both enshrined later during the Meiji era.

The shrine adopts the gongen-zukuri (or ishi-no-ma zukuri) architecture, in which the honden (main hall) and haiden (worship hall) is connected under the same roof in the shape of an H.

The shrine is decorated with lavish gold leafs and elaborate wood carvings over black lacquer. The bright colors of the shrine is an example of shrines from the Momoyama period. 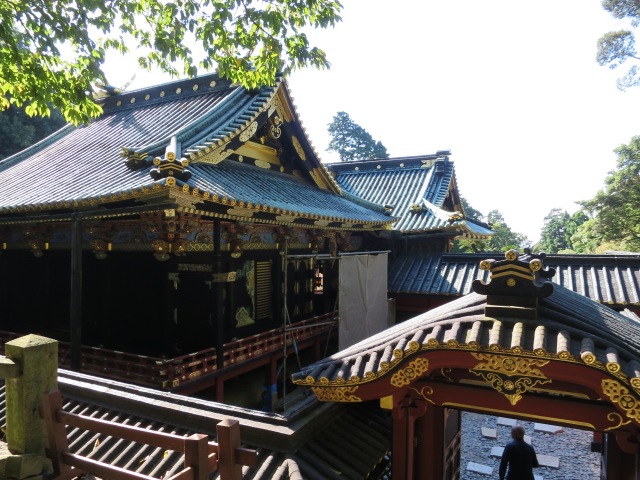 The stone stairs was not to be missed, so instead of taking the ropeway and bus from Nihondaira, I decided to take the bus from the foot of Kunozan.

The weather was great and the sun was bright, the view of Suruga bay from the stone stairs was wonderful.

After about 15 minutes or so, I finally arrived at Kunozan-no-Shita (foot of Mount Kuno). The bus schedule says that the bus departs from Kunozan-no-Shita. Now, where is the bus stop?

There were a few shops selling fruits and soft-serve ice cream nearby, so I decided to ask for directions. Probably not hearing the lady from the fruit shop right, I walked straight to the main road and reached the bayside. A number of hikers and cyclists were seen along the road. It was good getting lost, the sea was beautiful. 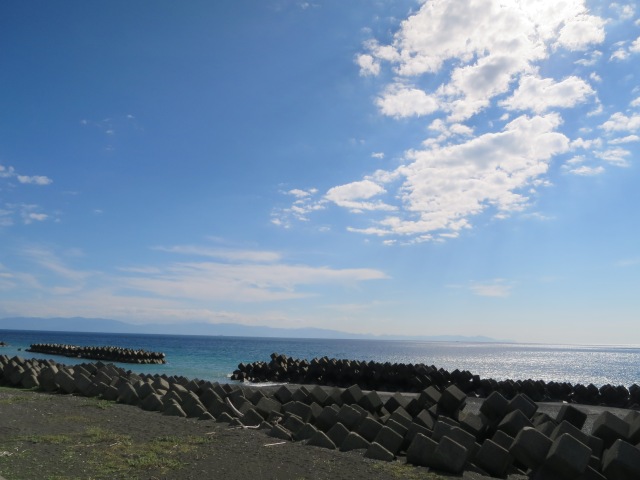 But I had to get on the right track soon, as I have another 3 sites to visit for the day. So, I went back to the line of shops. This time, I headed to one of the soft-serve ice cream shops and bought one strawberry flavored soft-serve while asking for directions. The lady was kind enough to hand me a copy of the bus schedule and ensured that I would leave the shop in time for the next bus.

Yes, so the bus stop is to the right of the start of the stone stairs. Walk a bit further right and the bus stop is on the right among some residences. Most buses from Kunozan-no-shita ends at Higashi-oya bus stop. You need to transfer to another bus bound from Shizuoka station from there. Ask the driver when in doubt.

Despite being a Sunday, Kunozan Toshogu was relatively quiet, which is much appreciated.

Shizuoka station is one of the shinkansen stops between Tokyo and Kyoto via the Tokaido Shinkansen line. I strongly recommend stopping by and visiting this hidden gem.