It was my last day in Japan for the Autumn 2017 trip, and I wanted to spend it enjoying the autumn colors, one of my main objectives of this trip. So as part of the plan, I headed to Rikugien (六義園), a strolling mountain and pond-style garden, built back in 1702 by Yanagisawa Yoshiyasu, trusted adviser of Tokugawa Tsunayoshi, the 5th Shogun of the Tokugawa Shogunate. 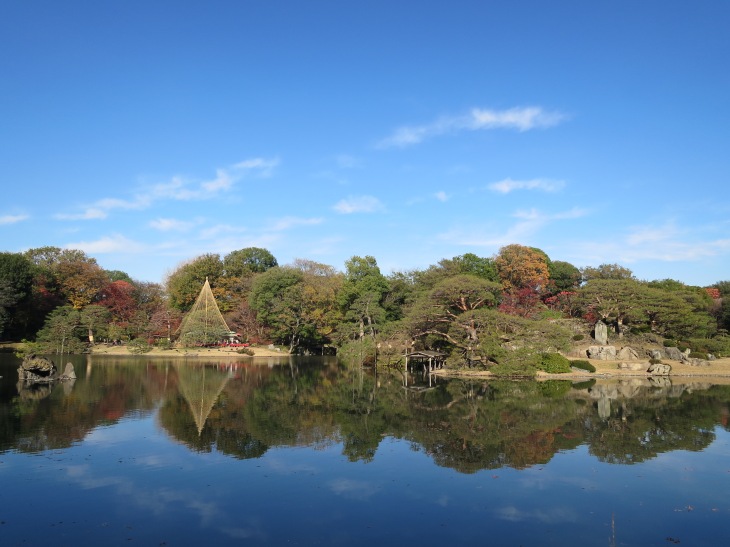 The garden was deserted after Yanagisawa died, and Iwasaki Yataro, the founder of Mitsubishi bought it in 1878 and restored the garden as his second residence (he was also the one who built Kiyosumi Teien). The Iwasaki family donated the garden to the City of Tokyo in 1938, and the garden was designated as a special place of scenic beauty in 1953.

“Rikugien” refers to the six categories of Chinese poetry, which was said to influence the division of Waka, a type of Japanese poetry. There are 88 scenes representing those described in a selection of Waka poems, which can be identified through stone markers found in the garden. However, today, only 32 of these stone markers remained.

Imo-yama and Se-yama are two garden hills located on Naka-no-shima, an island in the pond. The term “se” and “imo” were used in ancient language for “man” and “woman” and these two hills represents Izanagi and Izanami, the couple who gave birth to the islands of Japan based on the Japanese mythology.

Horaijima here is a small island in the pond made of stones, representing the legendary island of Penglai, said to be home of the immortals in Chinese mythology. Fukiage-chaya is a teahouse where you can relish in green tea and Japanese sweets at a small fee while enjoying the view of the garden.

Tsutsuji-no-chaya is a teahouse made of wood of Azaleas during the Meiji period, which survived the war. In autumn, the sight around the teahouse is especially stunning for the red maple leaves that surround it.

If you go up to this small hill called Fujishiro-Toge, you can see one of the famous views of the garden.

Togetsukyo is a stone bridge, named after a famous Waka poem describing the view of the moon moving across the sky, with the sound of the cry of a crane from a nearby rice paddy field. As the bridge is very narrow, there was a person controlling the traffic, allowing only either side to walk to the other side at one time. This bridge makes a perfect picture to catch reflections in the pond of those crossing it. 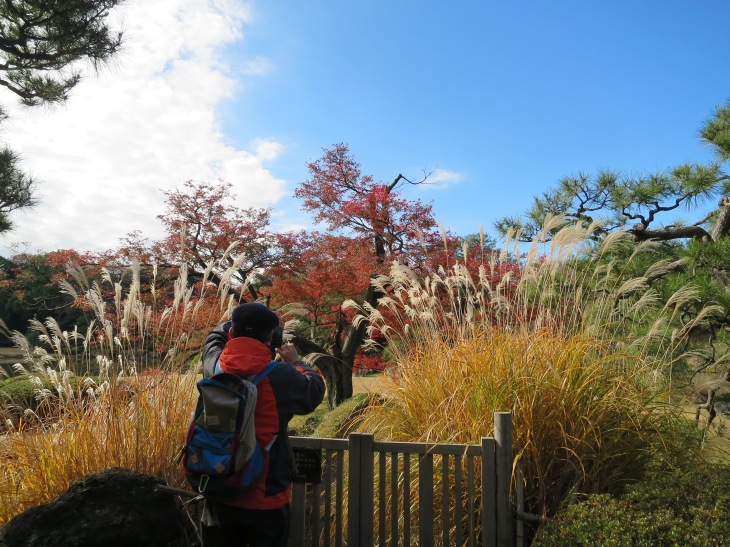 Rikugien is a 7-mins walk away from Kamagome Station on the JR Yamanote Line or the Tokyo Metro Namboku Line. It is also accessible (10 mins walk) from the Sengoku Station on the subway Toei Mita Line.

Another Tokyo Metropolitan Garden, Kyu-Furukawa Gardens is just a 15-20 minutes walk away from Rikugien and a combination ticket of both gardens can be purchased at 400 yen.