Otsu of Shiga Prefecture – never thought of coming here? Think again. It is only less than 20 minutes on train from Kyoto Station. If you want to avoid the crowds in Kyoto, make your way here to Shiga Prefecture (Shiga Tourism Official Website).

The first stop today is Ishiyama-dera, a Buddhist temple which can be accessed via bus (8 minutes) from Ishiyama Station (13 minutes from Kyoto Station). Alternatively, you can reach the temple in 30 minutes on foot. On the way, you will be able to see Biwako (Lake Biwa), the largest freshwater lake in Japan.

You will first see the Sanmon (also referred to as Todaimon), the large entrance gate which is guarded by two Nio (deva kings). Literature in the temples suggests that these guardians are carved by Tankei and Unkei – famous father and son sculptors of the Kamakura period. If you are a Gintama fan like me, you would remember Unkei and Kankei, two carpenter-siblings (red and blue) who helped our main characters in rebuilding Yorozuya base after Sakamoto happily destroyed it with his spaceship. Not sure whether that was any parody of the famous sculptors.

Passing the Sanmon, I passed a line of cherry trees, which would have looked beautiful if the flowers were blooming. Ishiyama-dera is famed for the variety of flowers blooming in all parts of the temple complex throughout spring and summer. I was here in spring, but the pictures I found online during autumn is just amazing that this needs a revisit!

There is also Miei-do, which enshrines images of Kobo Daishi (Kukai) and Roben (founder of this temple). Kukai is the founder of the Shingon sect of Buddhism.

Another hall is Rennyo-do, dedicated to Rennyo, the head of priest of Honganji (large temples in Kyoto, which I will post about some other time).

The Hondo houses the Nyoirin Kannon, known for blessing safe childbirth and marriage. It is also the oldest building in Shiga Prefecture.

A newly built hall, Shinkyo-do (1990) can also be seen here, it has a copy of the Heart Sutra, a popular Mahayana Buddhism scripture.

Going further into the temple complex, you will see various trees which will bloom at various times (both plum and cherry blossoms are here).

Murasaki Shikibu, the author of Genji Monogatari (Tale of Genji), was said to have started writing the famous literature at this very temple, on the night of a full moon. The temple complex also has a Genji Room, dedicated to the author.

An even newer building, the Ko-do hall is seen here, built in 2008.

Some of the flowers are starting to bloom.

Ishiyama-dera got its name Ishi (Stone) yama (mountain) dera (temple) from the large naturally-formed wollastonite (keikai-seki in Japanese) as seen in the picture below. The wollastonite is a designated national monument and is very rare in Japan. 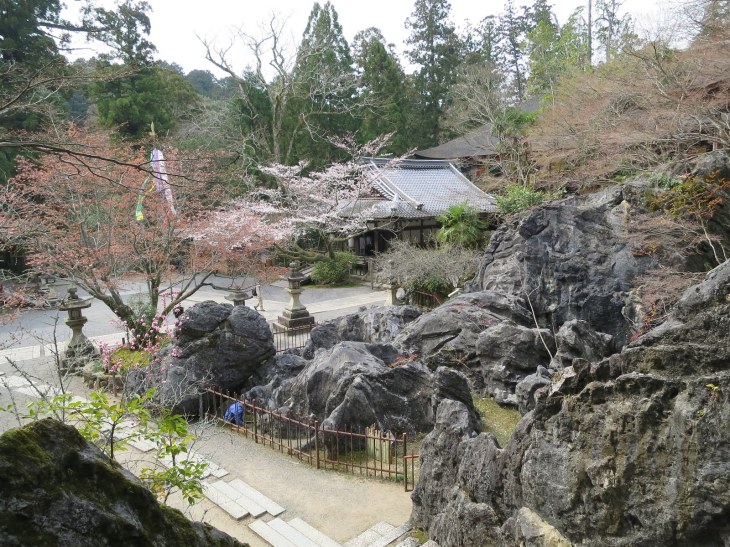 There is a Shoro (bell tower) in the temple complex as well, ageing 1000 years!

The tahoto (treasure tower) was built by Minamoto Yoritomo (founder of Kamakura Shogunate) and is the oldest of its kind. The tower is also a designated National Treasure.

The moon viewing pavilion – where I guess Murasaki Shikibu would have been when adoring the full moon can also be seen here. It it not accessible to the public.

A garden of Rocho Daitoku, known as a great restorer of the temple can also be found here.

Entrance fee is 500 yen. The temple is really worth the visit, and I will definitely visit it again in autumn. The temple closes early at 4 p.m. so make sure you do not get there too late.