In case you missed my previous posts, I have been covering Shikoku Mura, the open-air museum exhibiting traditional buildings and structures from all over Shikoku Region, dating back to mostly the Edo and Meiji periods. Since the museum has over 30 different structures on display, I have split this coverage into multiple posts. Here’s what I have covered so far:

I briefly mentioned the kozo mushigoya (bark-steaming hut) in Part 1 while detailing the interior of the Kono Family House which had a bark steamer for paper-making. Kozo, or paper mulberry is one of the most commonly used fiber for making the traditional Japanese paper, washi.

In the traditional washi-making process, the outer bark of kozo is steamed by lowering the hanging bamboo barrel seen in the picture below over a cauldron filled with mulberry branches. This particular hut was from the mountains of Tosa Province (current Kochi Prefecture) which was famous for paper-making.

Next is another family house – the Shimoki-ke no Jutaku (Shimoki Family House) given by Shimoki Eitaro from the 1,000m above sea-level Ichiu mountain village on the northern slopes of Mt. Tsurugi in Tokushima Prefecture. This farmhouse was built in 1781 and is divided into three large spaces, two for the living-sleeping quarters and one for work storage.

From the Shimoki-ke no Jutaku, the path passes by part of the Somegataki waterfall (which will be seen later) which was soothing and beautiful.

On the way to the Kume Tsuken Residence was the sozu karausu (water-powered mortar for hulling rice), the last type of mortars used for hulling rice which was used in Shikoku until the 1950s.

Going down the stairs towards the Kume Tsuken residence were some lovely autumn leaves. From here, I could catch a glance of the Somegataki waterfall. 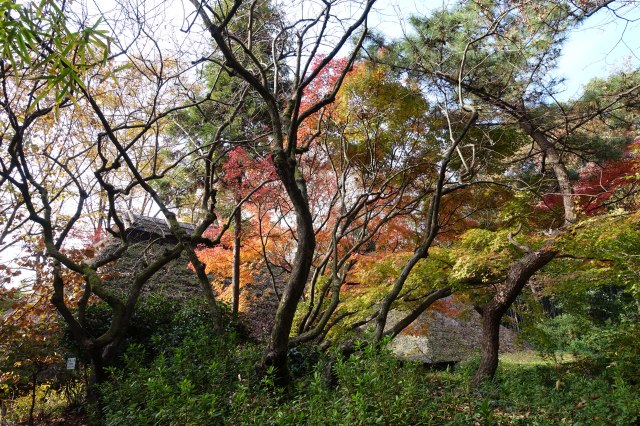 The Kume Tsuken-Sensei Kyutaku (Residence of Master Kume) was a house built in 18th century by Kume-sensei himself, who was known for cultivating salt-making in Sakaide in the Sanuki Province (modern Kagawa Prefecture). Sanuki Province went on to become one of the largest salt-producing regions in the Edo period, supplying half of the salt consumed in Japan at that time.

Remember the story behind the Iya Vine Bridge in Part 1 of this series? I mentioned that the Taira clan who was defeated in the Battle of Yashima fled into the mountains and built an ochiudo mura (refugee village). The next family house – the Nakaishi-ke no Jutaku were originally buildings from an ochiudo mura. On display are three buildings from the 18th century which were all built in a row. It was a tradition in the region to have an extra, smaller house for family elders and this was similarly practiced by the Nakaishi family. The omoya (main house) serves as the house for the eldest son, the inkyoya (second house) was for retired elders, while the naya (third house) was a work and storage room. 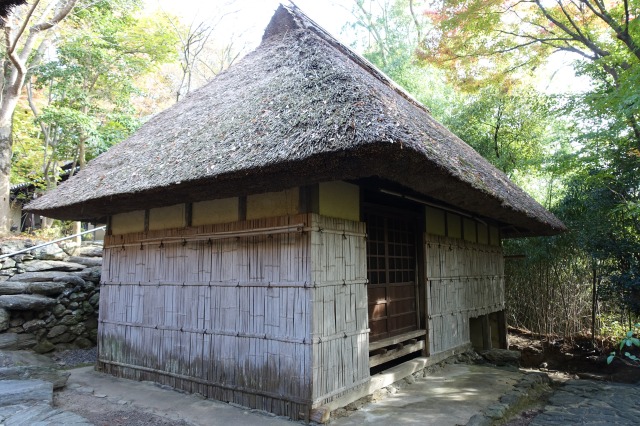 I was finally able to see the Somegataki waterfall behind the Nakaishi family house, taking a little break before the final leg of the tour.

Passing by more bamboo trees-lined path, I arrived at the Marugame-han Goyogura (Official Rice Storehouse of the Marugame Domain). As the name suggests, this 200-year old storehouse was from Marugame of Kagawa Prefecture. In the Edo period, Japan was divided into domains or han via the han system with each domain being ruled by a daimyo (feudal lord). These domains were defined by kokudaka which is expressed in koku, a measurement of the quantity of rice with one koku being equivalent to the amount of rice enough to feed one person for a year. This is reflective of the importance of rice at that time with such rice storage serving as the safe storage of the domain’s wealth.

And that concludes Part 3! Thank you for reading and stay tune to next week’s post for the final part of this trip report in which I’ll cover an arched stone bridge, a public granary, a soy sauce brewery and malthouse, and more storehouses.

You will most likely spend a good amount of time in this massive ‘village’ (translated from ‘Mura’), so be sure to allocate ample of time if you are planning to visit.

As mentioned in my previous post, there is a good amount of English labels and explanations for each structure, which was a pleasant surprise since I did not expect this after seeing the lack of foreign tourist in both Shikoku and Yashima.

How to get to Kotoden-Yashima Station:

How to get to JR Yashima Station:

If you are not keen on walking, you can even take the Kotoden bus from any of these stations (timetable here) @ 100 yen (10 mins from JR Yashima Station and 2 mins from Kotoden Yashima Station). The same bus will make a stop at Yashima Sanjo, thus making it a good combined trip.