Okayama Castle (岡山城) was built in 1597 by the daimyo Ukita Hideie at the order of Toyotomi Hideyoshi. Hideie was one of the Council of Five Elders and was married to Go-hime, adopted daughter of Toyotomi Hideyoshi. He sided the western army (Toyotomi) during the Battle of Sekigahara and although his forces were winning the battle against Fukushima Masanori, he was betrayed by Kobayakawa Hideaki and eventually lost. Hideie was sentenced into exile at the island prison of Hachijo-jima.

Kobayakawa Hideaki was awarded Okayama Castle from Tokugawa for his betrayal towards the Western army. However, he was only the castle lord for two years after he suddenly died without a successor. Thereafter, Ikeda Tadatsugu, one of Ikeda Terumasa’s son was appointed the lord of Bizen clan and was subsequently succeeded by his brother Tadakatsu. During an exchange of owners between Okayama and Tottori Castles, Ikeda Mitsumasa was transferred to Okayama Domain as the new lord of Bizen. The famous, neighbouring Korakuen was also built by the Ikeda clan. 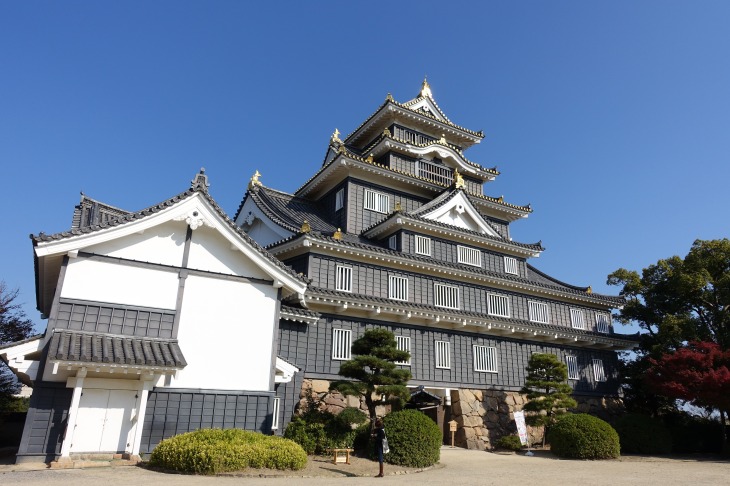 The most prominent feature of Okayama Castle is its three-tiers, six-stories tenshukaku (castle tower) in which the exterior is covered with black-boards, earning the nickname “Ujo” or Crow Castle. This is not to be confused with Matsumoto’s Castle nickname which is also Crow Castle but is “Karasu-jo”. In the past, Okayama Castle was even called “Kin Ujo” (Golden Crow Castle) due to its gilded roof tiles. Today, only a few parts of the roof tile is gilded including some adornment of shachihoko.

Okayama Castle was originally a large castle complex and was said to have 35 turrets and 21 gates. However, after the Meiji government took ownership of the castle in 1869, most structures were demolished in 1882 leaving only the tenshukaku, the Tsukimi Yagura (Moon-Viewing Turret), the Nishimaru Nishite, and the Ishiyama Mon. Unfortunately, the original tenshukaku and Ishiyama Mon was burnt in fires of the WWII air raid in 1945.

Most of the structures seen today are reconstructions – the tenshukaku in 1966, the Akazu no Mon, the Roka Mon, and the Rokujuu-ichi Gangi Ue Mon. The only structure which escaped the air raid was the Tsukimi Yagura which was built by the daimyo Ikeda Tadakatsu in 1620.

You can also try few cultural experiences in Okayama Castle like wearing a kimono or making bizenyaki (Bizen ware), the traditional ceramic ware of Bizen province at 1,230 yen.

Okayama Castle is also illuminated at night, and I did not missed the opportunity to see this after visiting Korakuen during it’s autumn lit-up. I have to say – the illumination was really pretty. 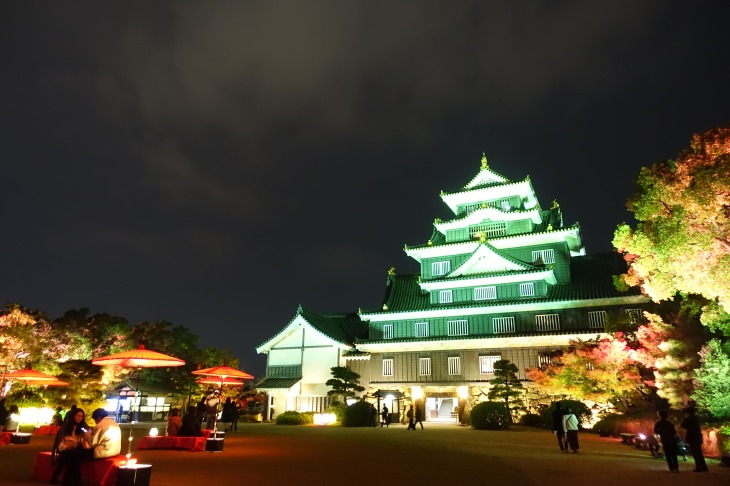 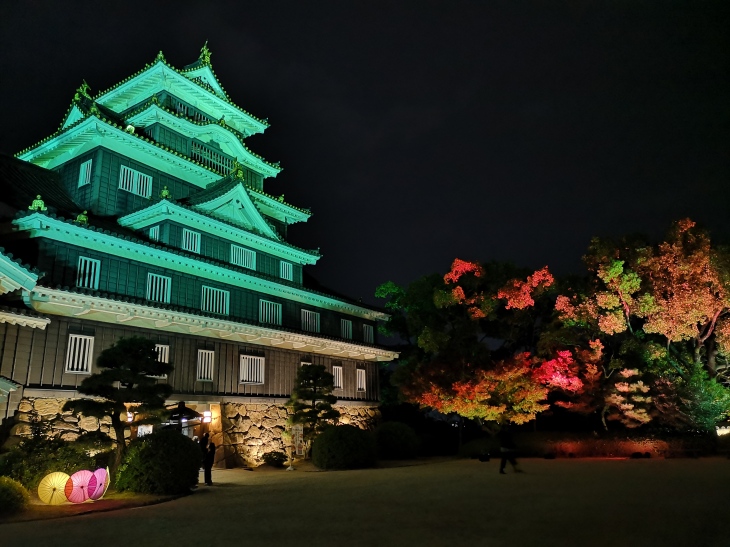 Combination tickets are not available during special exhibitions.

Alternatively, it is possible to walk from Okayama Station – only 25 mins, 2km.

Okayama Castle is also just a short walk across the river from Korakuen, the garden ranked as one of the 3 Most Beautiful Japanese Landscape Gardens thus making it a good combined visit.

Thinking of heading to the Chugoku and Kansai Region? Check out the Sanyo Sanin Area Pass to save on your transportation cost!