This marks my final post on the Ohara Temple Series, at least for Autumn 2017. I missed two temples during my trip – Jorengein and Kochidani Amidaji, which is understandable since visiting 6 temples in a day is already a lot. This should also be one of the last posts on my Autumn 2017 trip as I will start to write on my recent summer trip to Japan, now that I am back. Now, lets look at Ohara’s most popular temple – Sanzen-in. 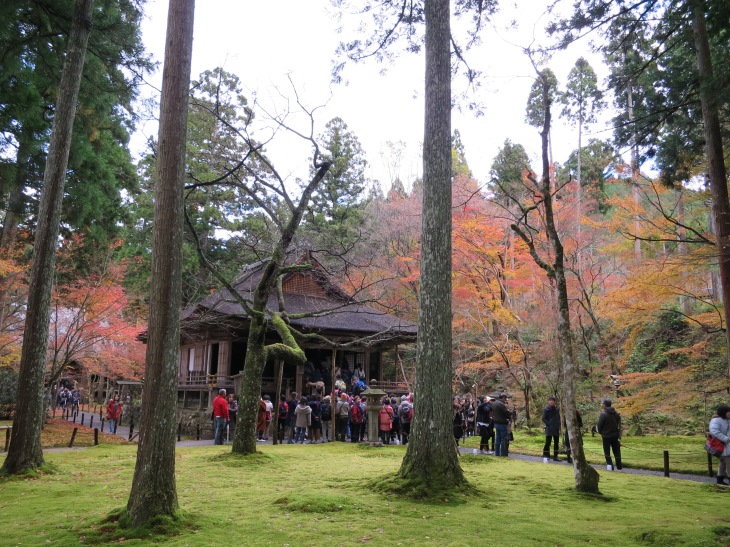 Sanzen-in (三千院) is a Tendai sect. of Buddhism temple established in year 804 by none other than Saicho / Dengyo Daishi, the founder of the Tendai sect. of Buddhism. The temple is also one of the five Tendai monzeki temples (temples whose head priests were member of the imperial family) in Kyoto, aside from Bishamondo, Shoren-in, Manshuin and Myohoin. The temple became a monzeki temple in 1130 when the second prince of Emperor Horikawa (73rd Emperor of Japan) became the 14th head priest.

First, you will enter the Kyakuden, which features fusuma (sliding door) paintings. Toyotomi Hideyoshi, Japan’s second great unifier, reconstructed this building with leftover materials from a renovation of an imperial palace.  Overlooking the building is a pond-and-hill garden, Shuhekien, redesigned by Kanamori Sowa, a renowned master of tea ceremony in the Edo period.

Next, is the Shinden (main hall) which worships the Yakushi Ruriko Nyorai, created by Saicho. The hall is used for Osenboko (a service with Shomyo, Buddhist chanting), originating from the time of Emperor Go-Shirakawa (77th Emperor of Japan).

From the Shinden, the Ojo Gokuraku-in (Amida Hall) can be seen through the big cedar trees and the moss garden, Yusei-en, a pond-strolling garden.

The moss garden is particularly stunning in autumn with the fallen leaves. 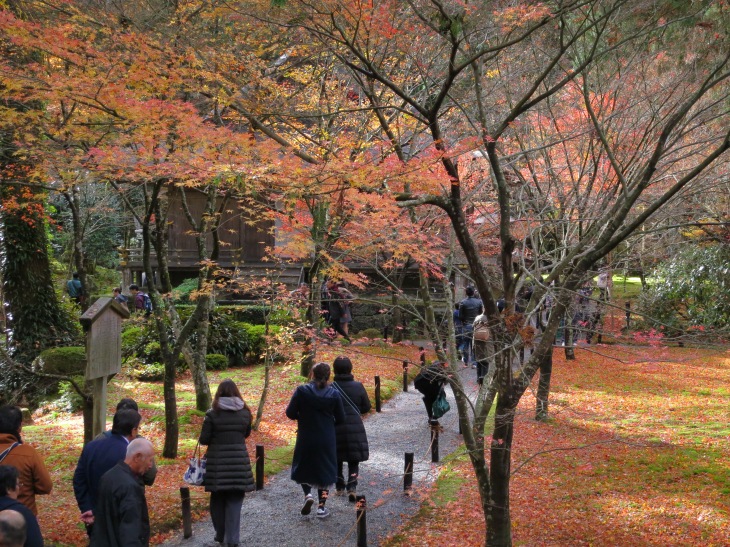 The Ojo Gokuraku-in was first built in 985 by Eshin Sozu (Genshin) and his sister, Anyo-ni in memory of their dead parents. Genshin is famous for his work Ōjōyōshū (Essentials of Birth in the Pure Land). The ceiling of the hall is rather unique as it had to accommodate the Amitabha Trinity which was taller than the hall. The hall worships the Amida Buddha, flanked by Kanzeon Bosatsu and Seishi Bosatsu (Mahāsthāmaprāpta).

There are Warabe-Jizos (laughing Buddhas) in the moss gardens, all with amusing faces.

Walking pass the moss garden and uphill, you will find another building, the Konjiki-Fudo of Golden Acalanatha, which is located in the hydrangea garden. I imagine this place will be immensely beautiful in summer. This hall is rather new, built in 1989 and worships the Konjiki Fudo Myoo. Near the hall is a resting area where visitors can enjoy free tea – this was definitely enjoyable given the cold weather. The tea I had that day was plum tea and it had gold flakes!

Next is Kannon-do hall, which worships a standing 3-meter-tall golden figure of Kannon. Outside the hall are rows of miniature Kannon statues (Sho-kannon-zo) donated by visitors.

If you explore into the further back, there are pathways through bridges, where you can find more amusing stone statues. I couldn’t help myself but to take pictures of these.

The approach to Sanzen-in is lined with restaurant and shops, so you can easily enjoy lunch and tea-break here if you are intending to spend the whole day in Ohara as I did.

Check out the rest of the Ohara Temple Series here: