Hasedera (長谷寺) is a temple of the Buzan school of the Shingon Sect of Buddhism, located on a hillside in Sakurai, Nara Prefecture. The temple’s massive ground boasts as many as 30 buildings and has a traditional monzencho (literally town before temple gate).

The temple was originally built in 686 when a Buddhist priest, Domyo enshrined a bronze plaque, Douban Hokke Sessou Zu, along with a three-storied pagoda and two sitting Buddhas as prayers for Emperor Temmu’s health, at the current Moto Hasedera Temple, nearby the Hondo (Main Temple). 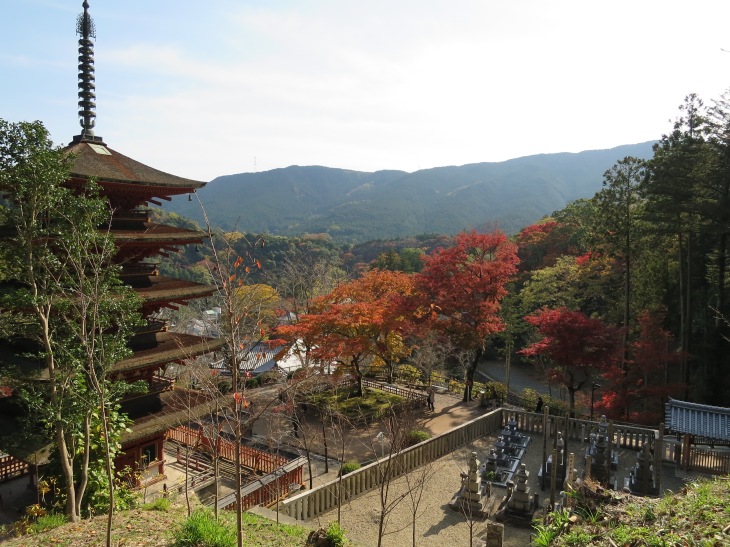 Legend has it that a monk intended to carve a statue out of a large tree he found in Hase, but due to the size of the tree, he ended up carving two statues. One of the statues is this temple’s object of worship, while the other was washed away in the ocean for others beyond the sea. The statue would later appear along the shores of Kamakura, where another Hasedera was built to enshrine the statue.

During the Heain Period, Hasedera was favored by aristocrats and nobles from Kyoto and the temple was featured in some classic literature such as Genji Monogatari by Murasaki Shikibu and Makura no Soshi by Sei Shonagon. Authors like Michitsuna no Haha (who wrote Kagero Nikki) and Sugawara no Takasue-no-musume (who wrote Sarashina Nikki and also niece of Michitsuna no Haha) were also some of the temple’s famous worshipers.

Being located along the route to the famous Ise Shrine added to the popularity of the temple. The temple became a main temple of the Buzan school after the Buddhist priest Senyo (from Negoro-ji, a temple Wakayama) came to the temple in 1588. 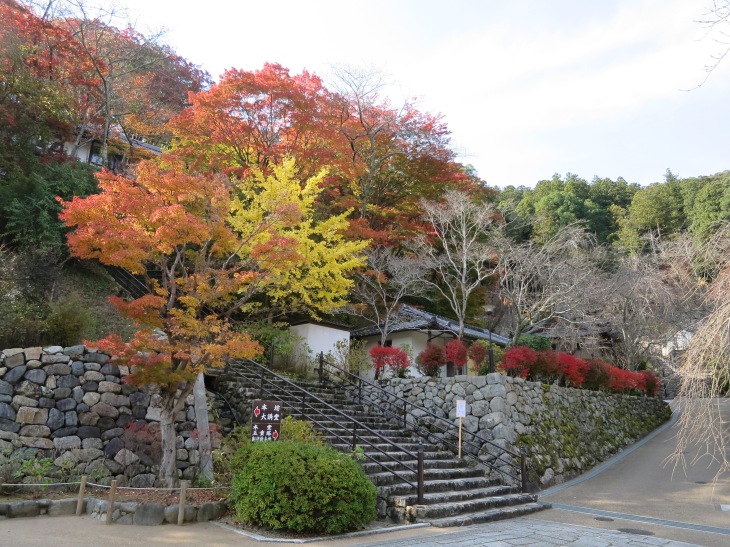 Walking from the old monzencho, and upstairs, you will come across the Niomon, with Deva at both sides of the gate. The current Niomon was rebuilt in 1894. The “Hasedera” character written on the gate was a calligraphy by Emperor Go-Yozei.

After passing through the Niomon, do not feel overwhelmed by the flight of stairs as it is actually an easy climb. The Noboriro (climbing corridor) is only 200m in length or 108 Ken in Japanese units, with 399 steps. In Buddhism, it is said that there are 108 defilement of the spirits, thus each defilement goes away with each “Ken”.

This corridor was built in 1039 by Nakatomi Nobukiyo (architect of Nara’s Kasuga Taisha) as a gratitude for the miraculous recovery of his son’s illness, after he came to the temple to pray for his health. The current corridor was reconstructed in 1894.

During New Year’s Eve, the corridor is lit up with thousands of lanterns in a ceremony called Kannon Mandoe (Kannon 10,000 Lights Ceremony). As with a lot of temples and shrines during New Years, please note that Hasedera is especially crowded on this day. You can still catch a glimpse of this on the 1st, 2nd and 3rd of January from 5 p.m. to 8 p.m., when the crowd should have lessened.

At the end of the stairs is the Hondo, which was reconstructed in 1650, using donations from Tokugawa Iemitsu, the 3rd Shogun of the Tokugawa Shogunate. This is where the temple’s famous Juichimen Kanzeon Bosatsu (Eleven-faced Kannon) in enshrined. The statue was first enshrined here in 727 by Tokudo Shonin, a priest who started the Saigoku Kannon Pilgrimage, a pilgrimage of 33 Kannon sites in Kansai region. It is said that when Tokudo Shonin was at death’s brink due to a grave illness, he met Enmao (Death Lord) in his dream in which Enmao asked that he starts the Kannon Pilgrimage, preventing Tokudo Shonin’s death.

The original statue is said to have been built within just 3 days, from a camphor tree from Ominokuni Takashima. Rebuilt in 1538, the statue is 10m 18cm in height, making it the largest wooden Juichimen Kanzeon Bosatsu in Japan. The Kanzeon Bosatsu statue is seen holding a Shakujo (bishop’s staff) in his right hand, and standing on a Daibanjaku. The eleven faces consist of 3 expressions of mercy, 3 expressions of anger, 3 expressions of praise, one of enlightenment and another expression with a smile. The Kannon at Hasedera serves as an example for other Hase Kannon in Japan.

Normally, the statue can also be seen from afar. However, on special occasions, worshipers are allowed to touch the feet of the statue. Due to this, the feet has a shiny black color compared to the gold color of the rest of the statue’s body. To experience this, a fee of 1000 yen is required and you will be guided by a monk on the special rituals.

The front of the main temple is similar to that of the famous Kiyomizu-dera in Kyoto, and offers a view of the temple grounds and the hills around. You can also see the pagoda from here.

The Hondo also has a morning routine which has been practiced for over 1000 years. Although outside the official visiting hours, it is possible for worshipers to join this morning routine, details are described at the end of the post.

Nearby the Hondo is the Kobo Daishi Miedo, built in 1984 entirely of cypress to commemorate the 1150th anniversary of Kobo Daishi’s passing. Kobo Daishi (or Kukai) is the founder of the Shingon sect of Buddhism. The temple holds a ceremony for Kobo Daishi on the 21st of each month.

My favorite building of the temple has to be the Goju-no-to (Five Storied Pagoda), which was only built in 1954, the first pagoda to be built in Japan after the second world war. As it was built during the Showa period, the pagoda is called Showa Pagoda. The pagoda is a good example of a Japanese-style pagoda, with a red exterior, gold sorin (top shaft) and brown thatched roof made of cypress bark.

Next to the pagoda is the Nokotsudo, a hall for memorial services held at the end of each month. Enshrined here is the Jizo Bosatsu.

Walking further, you will find the Honbo (Main priest’s home). The large building consists of an auditorium, drawing room, and training halls for the monk’s training, both practical and theoretical. In Hasedera you will see a lot of young monks in training.

First built in 1667 from Tokugawa Iemitsu’s donations, it was burnt in 1911 (Meiji period). The current building was reconstructed in 1924, made entirely of cypress.

Hasedera is famously known as the Flower Temple due to the many flowers adorning the temple throughout the year. Sakura blooms from late March to early April. Blooming from mid April to early May, 7,000 peonies are planted along the stairway corridor, creating a magnificent sight. I would love to come here to see the peonies!

Hydrangeas also bloom in summer and autumn colors are vibrant from mid to late November. There are other flowers blooming all around the year, download the English pamphlet from the official site for more details.

In the monzencho, you can find a number of restaurants, souvenir shops and ryokans. The town is especially famous for their kusamochi (mugwort rice cake), and somen / nyumen (white noodle made of wheat flour).

Time required: 2 hours (unless you speed through everything / visit the main buildings only)

Hasedera is a 15 minutes walk from Hasedera station on the Kintetsu Line.