I did not mention much about Byōdōin in my last trip there, thanks to a bad migraine which impeded memories from the visit. So lets give this temple some background story before we move on to the coverage of this second visit.

Byōdōin (平等院) was originally a villa of Minamoto no Shigenobu, Minister of the Left, and was transformed into a temple by Fujiwara no Yorimichi (of the powerful Fujiwara clan) in 1052.

Byōdōin is known for the Phoenix Hall, Hōō-dō, or Amida-do (its proper name), with a central hall housing Amida Buddha, twin wing corridors and a tail corridor. The Phoenix Hall was named such due to its appearance which resembles a phoenix, with the wings and tail. The exceptionally beautiful structure is surrounded by a pond, adding to its beauty. The Phoenix Hall is the only surviving structure of Byōdōin thus making it one of the few remaining buildings from the Heian period (794 to 1185), while the rest were burnt down.

I found out about the special night illumination of the temple while visiting the Kyoto City Official Travel Guide for special events for the month. The special night illumination was only for November 18-19, November 23-26, December 1-3, 2017, from 6 to 8.30 p.m. (check out details at the end of the post for 2018’s dates). I thought of arriving early to catch some dinner at Omotesando before going to the temple, arriving the station at about 5.20 p.m.

Well, well, guess what? Dinner will have to wait, the queue was horrendously long. In front of the main gate itself, there were 3 rows, followed by a row going uphill to the left, and continuing another line to the right.

Visitors were allowed to enter the temple at 5.45 p.m., before the supposed opening time. Once the temple opened, the queue was moving at quite a fast pace. I was in the temple by 6.15 p.m.

I have to admit, the Phoenix Hall at night? Very pretty. The illumination goes on and off every 5 minutes.

Taking pictures is not easy in such crowd, how do you even get to the front? 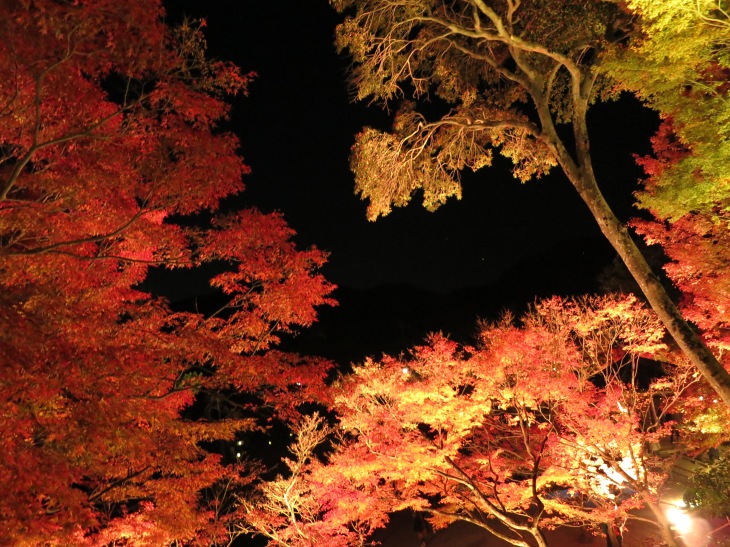 If you are in town and should there be another special night illumination in Byōdōin, I recommend paying a visit to see the already beautiful temple illuminated. Uji is just about 30 minutes away from Central Kyoto. Entrance fee is still 600 yen, similar to the day visit. Do not fear the long queue, it was moving pretty fast.

Admission fees: 600 yen (if you purchase ticket to enter during the day, you can re-enter at night with the same ticket)