In an attempt to escape the crowd flocking to popular autumn spots in Kyoto, I headed to Bishamondo Temple (毘沙門堂), located in Yamashina ward. This temple is famous for its crimson red leaves, thus despite being away from Kyoto’s popular tourist spots, it still enjoys a fair number of momijigari enthusiast in the autumn season.

The temple traces back to year 703, founded by monk Gyoki on the instruction of the 42nd Emperor of Japan, Emperor Monmu and was originally named Gohozan Izumo-ji due to its original location in Izumo on Mount Goho, north of the Kyoto Imperial Palace.

Bishamondo was renamed after one of the Four Heavenly Kings enshrined here, Bishamonten (Vaisravana), in which the statue is said to be a creation of Saicho, the founder of the Tendai sect. of Buddhism in Japan. The wood for the statue is said to be the surplus of what was used to make the famed Yakushi Nyorai statue in Enryaku-ji, also founded by Saicho.

The temple’s conditions declined due to the Onin War but was revived and relocated to the current location in 1665 by Tenkai, a Tendai sect. monk who was associated with the founder of the Tokugawa Shogunate, Tokugawa Ieyasu. His disciple Kokai, continued his efforts to complete the reconstruction.

The 111th Emperor of Japan, Emperor Go-Sai’s sixth child, Prince Koben received his Jukai (lay Buddhist ordination) at Bishamondo and spent his life as a priest here. Thus, the temple became a Monzeki temple (temples headed by families of the imperial family or aristocrats), and is one of the only five Monzeki temples of the Tendai sect. in Kyoto.

After enjoying the autumn leaves before the entrance of the temple, you will find steps up to the Niomon. At both sides of the Niomon you will find the two Nio – Agyo and Ungyo, sculpted in 1665. Since this is a Monzeki temple, there is also a Chokushi-mon (Imperial Messenger’s Gate) built in 1693 for the use of the imperial family.

The main attraction of Bishamondo temple is of course the Hondo or the main hall, built in 1665 by Tokugawa Ietsuna, the 4th Shogun of the Tokugawa Shogunate. This is where the statue of Bishamonten is enshrined. Right before the Hondo is the Karamon, also built in 1665. Going further you will find the Reiden Hall, in which an Amida Nyorai statue is enshrined here. Another point of interest here is the dragon painting on the ceiling of the Reiden, painted by Kano Eishuku.

Next is the Shinden, which used to be Emperor Go-Sai’s imperial residence. The Shinden features fusuma (sliding screen) paintings by Kano Masunobu, foster son of the famous Kano school painter Kano Tanyu. Behind this building is a chisen-kaiyushiki garden (strolling pond garden), called Bansui-en.

Bishamondo is also famous for its 150 years old Shidarezakura (weeping sakura), attracting visitors in spring and is usually at its peak around early to mid April.

If you make a detour to the right-end of the Hondo, you will find Kodai Benzaiten, enshrining Benzaiten (originated from the Hindu goddess Sarasvati).

Outside the temple you can explore the nearby grounds for more autumn delights. 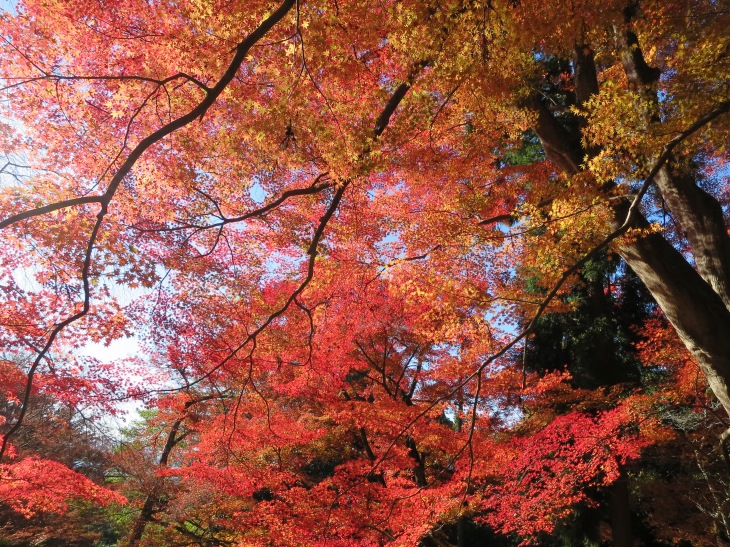 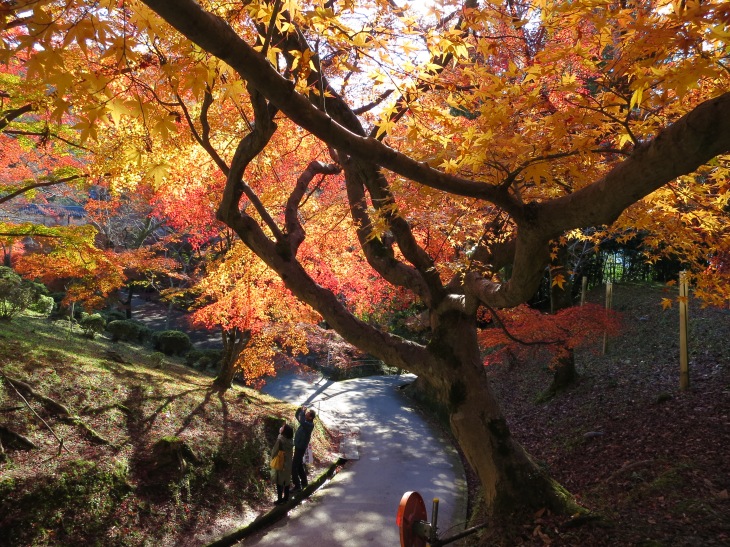