I was staying at a guesthouse the night before and had the second floor to myself as there were only a few guests staying there that night. It was scary as the building was quite old, but internet speed was super fast as I was probably the only one using it.

I was supposed to take the 7 a.m. bus from Nagano station (the station is roughly a 10 mins walk from the guesthouse), but had woken up late to catch breakfast. Thinking I could grab something when I arrive at Togakushi and not wanting to wait another hour for the next bus, I happily boarded the 7 a.m. bus without having breakfast.

Most people take the bus up to Togakushi-okushairiguchi (upper shrine entrance), but I got down at Togakushi-hokosha (lower shrine), intending to hike all the way from the lower shrine to the upper shrine. The bus was 3/4 full, and I was the only one getting down at the lower shrine. Disappointed that there were no signs of a convenience store or restaurants around the bus stop, I headed to the shrine.

Togakushi, which means “hiding door” refers to (according to the Japanese mythology) the door of a cave called Ama-no-Iwato in Takachiho (Kyushu region) in which Amaterasu (the Sun Goddess) had hid herself due to her brother Susanoo’s mischief, which brought darkness to the world. Other deities tried to lure her out by dancing in front of the cave, and as she was looking out, wanting to see what was going on outside the cave, Ame-no-Tajikarao (the god of physical powers) pulled out the cave’s stone door and threw it away, flying as far to Togakushi (Kyushu to Chubu is a distance!) to prevent her from hiding again. The upper shrine worships Ame-no-Tajikarao, while the middle shrine worships the deities who performed the dance in front of the cave. 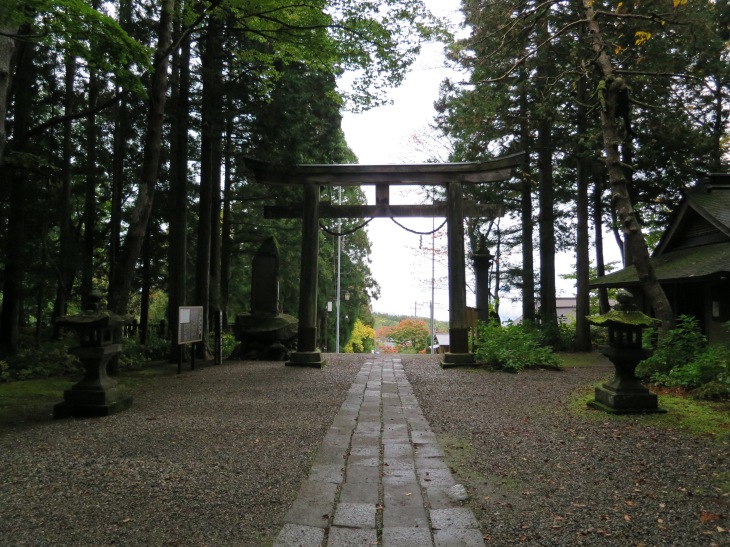 There was only one other person at the grounds before the stairs leading up to the shrine.

The stairs had 270 steps, met another two hiker / worshiper here.

The Hokosha enshrines the god of learning, crafts, sewing, safe births, and protector of girls. 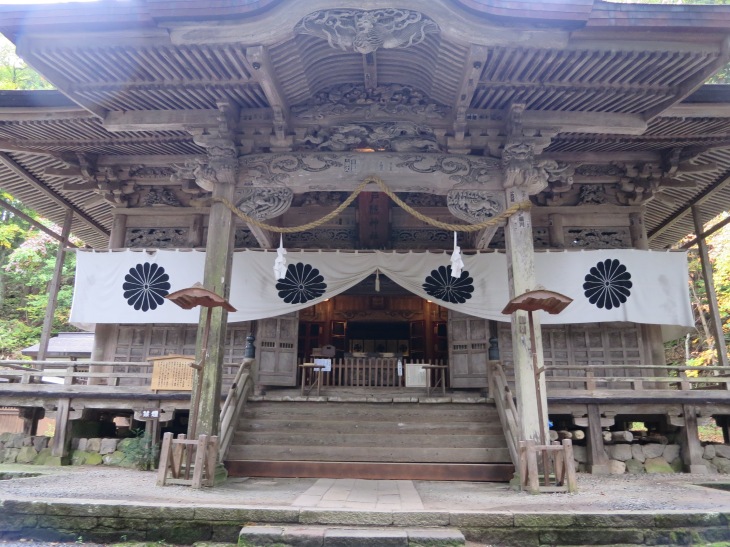 The trail leading to the middle shrine, Chusha is to the right of the shrine. There was no one around at that time and looking at the “Beware of bears” sign at the start of the trail had me walking faster than I should. It was 2km to the middle shrine and before reaching the residential area near the middle shrine, I only spotted one elderly resident who was carrying a bear bell.

Tired (from high-speed walking) and hungry, I was looking around for food. It was only 9 a.m., while there were definitely soba shops around (Togakushi is famous for its soba), none were open. Well, obviously – it was 9 a.m.! Instead, I had ice cream sold at a nearby tourist centre who offered a map of the Togakushi area.

After resting for a while and contemplating taking the bus to the the upper shrine, I decided to continue the hike upon seeing the female hiker I saw back in Hokosha. I did not regret the decision – the autumn colors along the trail from the middle shrine to the upper shrine was stunningly beautiful.

Seeing the bear sign again, I braced through the hike knowing that another hiker was right behind me. I met only 3 other hikers (who were on the opposite direction) on the way to the upper shrine.

Thanks to the beautiful scenery, I paced slowly and the 2km trail was over before I knew it. There was definitely more crowd around the upper shrine area. Overjoyed at the sight of an opened soba shop, I had my first meal of the day (never take a long walk without breakfast anymore!). Then, I was ready to walk the next 2km to the upper shrine.

The path to the upper shrine is lined by 300 to 400 cryptomeria trees. 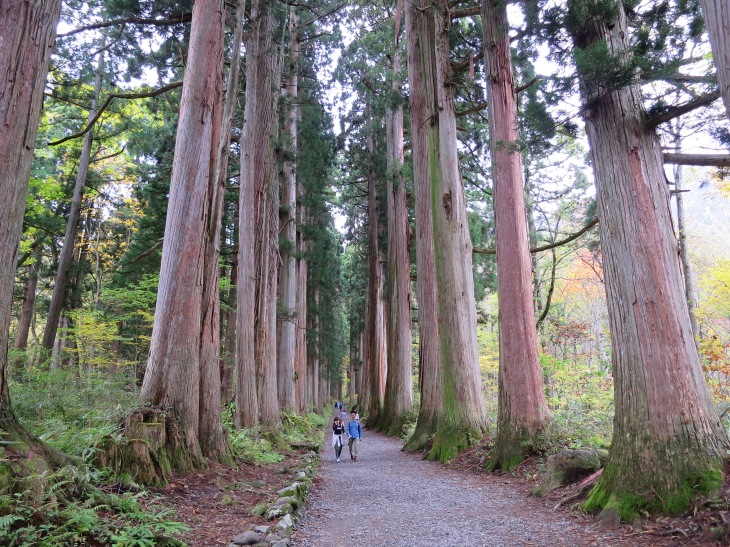 I love autumn in Japan, so much more than spring.

There were even elementary school kids making their way up to the upper shrine. 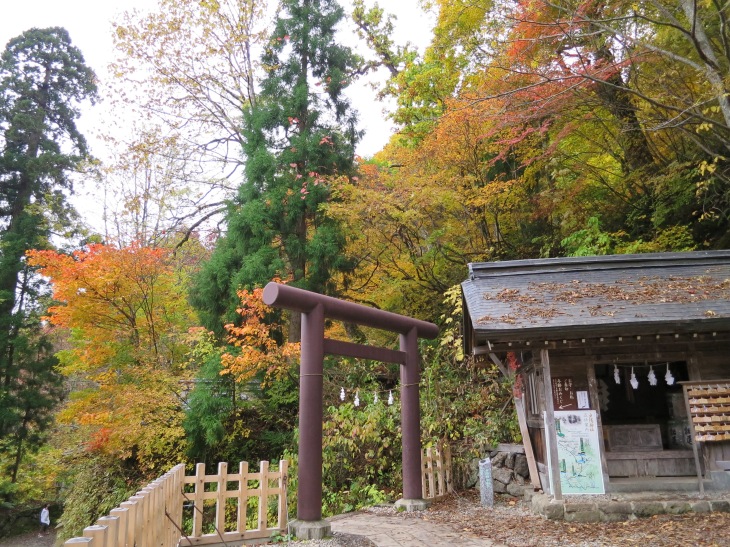 After heading back to the entrance to the upper shrine approach, I headed to the Togakure Ninpo Museum, which is just a short walk from the bus stop. Togakushi is said to be the home of the Togakure School of Ninja, and this museum houses the Togakushi Folk Museum and a Ninja House. Entrance fee is 600 yen.

The highlight is definitely the Ninja house, which prohibits photo-taking so I cannot show you any pictures. It is a house with hidden doors and you are supposed to open the right doors in order to exit the house. There was no one in the house at that time so I was taking my time exploring and embarrassing myself. Towards the end, other visitors came in and it was no longer fun as we were competing on who to get the right door first. They should probably consider limiting the number of visitor allowed at any one time. 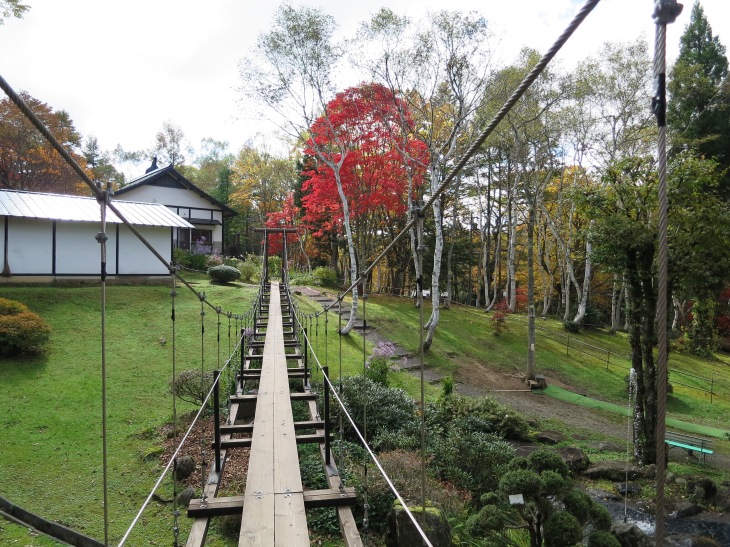 Togakushi is definitely a recommended visit especially if you are in central Nagano – it is only an hour away! I will definitely be returning here as there are other parts to explore e.g. hiking past the lakes (Kagamiike), hiking the Togakushi mountain range.

From Nagano station, bus departs as early as 7 a.m. and it takes about an hour to reach the upper shrine. The last bus departs at 7 p.m. Buses departs roughly hourly.

Buying the Togakushi Free Kippu is recommended, it lasts 5 consecutive days @ 2,600 yen. That easily pays off a round trip between the upper shrine and Nagano station.

The bus timing changes season to season, so check out the Alpico site or get your hands on the timetable at the station.